When I left the house I grew up in, I took very little with me. And the vast majority of what I took has either been discarded, or was lost in a storage unit I could no longer pay for. What remained was two pieces of furniture, and one cookbook.

I thought the cookbook was my mom’s – which made it mine, to my mind – so I took it when I left. I later found out that it was my father’s, and he was a little displeased to find out I’d been hoarding it in various states he wasn’t living in. This cookbook has become an interesting symbol to me. It became more than a cookbook; it became a link to my past and my family, and I learned, perhaps for the first time, that I was good at something other than school (though it has to be said, still “book learning”).

That cookbook had a bright yellow cover – to start with. I don’t remember losing the first piece of the cover, but I know the front cover and spine went first, which was kind of convenient, because I was left with a big book that essentially had a cardboard stand on the back. Eventually, the back cover went with the first, and then the table of contents and index pages gradually started to peel away, never having been meant to be out in the open. 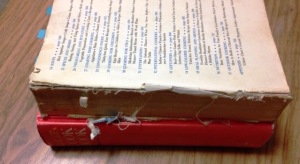 Still, I cherished the cookbook. By the time the front and end pages were slowly being whittled away, I no longer needed them; I could flip to nearly anything I needed to find. For all that, I’ve made very few recipes from it. The ones I have, though, are what I consider my signature recipes and, for the most part, are exactly as written in the book. (The cooks out there just gasped, I can tell. Yes, I use these recipes to the word of how they’re written. They’re that good.) If I’ve made you pie, the crust came from this book. It was my first pie crust, and it has never turned out less than excellently. If I’ve made you apple pie, it came from this book, and I’ve never found another apple pie recipe that can top it. If I’ve made you white or honey wheat bread, it almost certainly came from this book. I’ve found other bread recipes I love after years of baking, but I started here, with “McCall’s Basic White Bread.”

Eventually, I realized that I probably needed to do something about this tattered old cookbook. But this cookbook was older than I was. I did some research and found that it had been printed again, but it was “updated,” and I wanted my quaint cookbook exactly as it was, telling me that baking bread for my husband was the very best thing I could do before he got home.

At a small thrift store in an only slightly larger town in Wisconsin, I found another copy, though it was red, where mine had been yellow. That is not the red book in the pictures above. Having learned the origin of the cookbook, that copy went to my dad, in apology for taking his. I continued to use my stained, torn, coverless cookbook. I’ve been searching thrift stores and antique stores for a copy ever since. Only last week it occurred to me that I could probably find one on eBay. Surely, though, I couldn’t afford a 50 year old cookbook. To me, it was invaluable, so what price would I pay for a “new” one? It turns out, not much. The minute I found this one, I bought it. In addition to being a complete version of my favorite cookbook, it had a secret.

When it came, I spent an hour paging loving through the recipes I was already familiar with, reading about the proper number of appetizers to serve at a dinner party, and how to carve a turkey. I read that serving my first flawless dinner for my husband’s work guests would cement my value as a homemaker, and I smiled. I may never hold a dinner party with four cold appetizers and two hot ones, but I might not have to find a replacement for this cookbook until another 20 years have gone by.

Want to pass this on?